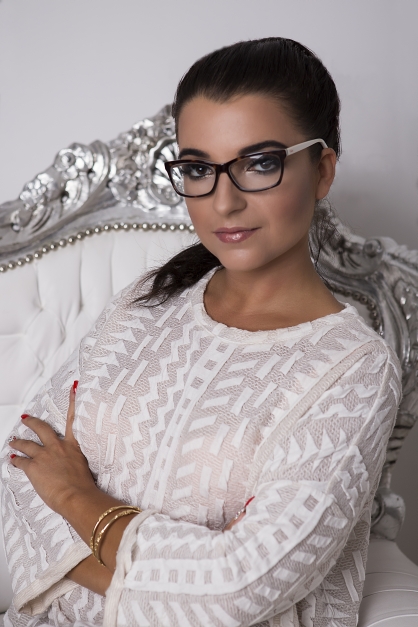 PhD Magdalena El Ghamari – Assistance Professor at the Collegium Civitas University – Head of Cultural Safty Department. Between 2013-2017: lecturer at the University of Bialystok (Institute of History and Science Policy, Department of International Security) and an analyst at the Institute for the Study of Terrorism in Rzeszow, Foundation Po.INT and online website Defence24.
Founder and president of the Foundation El-Karama. Member of the European Security Association Decision of the Association of Veterans in UN Peacekeeping Missions. International Project Manager: Balkan melting pot of safety problems of the present, the challenges of the future?
She completed doctoral studies in the Department of Joint Action National Defence Academy. Doctoral dissertation entitled "Interculturalism in crisis response operations", completed in the area of defense sciences, specializing in strategy and operations. She opened a second Ph.D. at the National Academy of Sciences.
University lecturer and trainer (School of Common Knowledge Society in Warsaw, University of Information Technology and Management, School of Entrepreneurship and Management in Warsaw, the Training Centre for Peace Support Operations in Kielce, UNESCO, Intervention Groups Prison Wardens, Border Guard) and participant of international programs (Helsinki Human Rights Foundation, Polish Red Cross, the European Academy of Diplomacy).
She is also author in the field of international security, intercultural and culture of the Arab - Muslim (last monograph: "Between culture and religion - military operations in Iraq and Afghanistan, Publishing Kucharski, Torun 2015). Trainer participants of Polish military contingents in the field of environment operations. It operates a network of lectures titled "In the culture of Islam" for teachers and high schools throughout the country. It works within the framework of lectures and conferences with many universities in Poland (WSOWL, UJK, Adam Mickiewicz University, Poznan WSB) and foreign University in Kosovo (Pristina - as a visiting professor at the Summer University).
Currently conducting research related to migration and refugees in Europe (the case of the MENA region (with a focus on Albania, Macedonia, Montenegro, Bosnia and Herzegovina) Research interests: MENA region, threats to international security, terrorism, fundamentalism, cross cultural awareness, the Balkans, interculturalism, NATO operations, military.

Cultural security is a new and dynamically developing phenomenon in contemporary international relations. Cultural factor most accurately reflects the evolution of security after the Cold War, because it concerns human collectivities - the existential needs of non-state actors as well as the value system and new threats. This view from the non-military point of view of security was, until the early 1990s, severely restricted and often neglected internationally. The bipolar system ensured the stability of international order and allowed to analyze the mechanisms of its functioning on the basis of realistic theories of balance of forces. The fundamental problem of societies and states was the danger of transforming the ideological and political antagonisms of the two superpowers into a global military conflict. Other non-military threats did not seem so important at the time to treat them as a separate phenomenon. Religious and ethnic disputes were artificially suppressed or explained in terms of the rivalry of the two powers for domination in the world. The causes for the emergence of security threats - cultural are very different. Mainly they are the misunderstanding of both sides and the unwillingness to know something else. Today we live in a multidimensional society, where on the same plane there are different social groups, with different cultural features. People with different outer appearance, language, religious beliefs, and values are intertwined. There is a mutual perception of difference with different effects.
The cultural security of the community is therefore more than a simple sum of the security of the individual. It is a new quality. This results in the correctness of the difference between cultural security (societal) and social (social). While in the first case we speak of the fraternity of the community as a whole, in the second - on the security of individual individuals, mainly related to the economic dimension.